A photographic work by Matthias Maas

Some things simply happen by chance. I can still remember the first time I encountered the project Canfranc. I was astonished by looking at the photos in the magazine that we had taken along from a car dealership. Unbelievable, I thought! Man! Such a building in the middle of nowhere of a spectacular North Spanish landscape. I felt the architecture photographer stir in me. The photos in the article did not do justice to the actual site and so the ambition seized me to take better photos of the construction.

This was the beginning of this project. It started without a clear goal, simply as a free photographic work aside from the daily business – just the pure joy of photography. I could infect a friend and colleague with my enthusiasm for Canfranc. Together we started the preparations. By encouraging each other the project became reality. We loaded the car with equipment and set off quite unbiased. 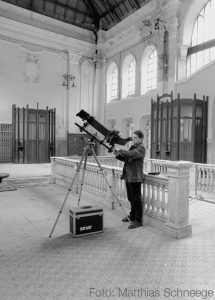 Arriving at Canfranc, I noticed that the morbid atmosphere, the dirtiness and the smell of mould distressed me. It took me one and a half days to set up my camera for the first time, which was also due to the cold and wet weather. Then, there was no stop anymore, the professionalism prevailed and didn’t allow any delays due to the limited time. So, fifty or more pictures shot by the 4 x 5” view camera within 5 days developed a feeling of enthusiasm in regard of the huge railway station and its photographic discourse.

Back in the photographic studio I carefully started the extensive laboratory work. When all negatives were developed and the result was on the light table, doubts arose if I – as a photographer – could present a good or outstanding result of photos, corresponding to my own expectations. The outcome was somehow disappointing. I stopped the work pretty depressed and tried to forget it once and to gain some time.

This only changed in the winter when I got the idea to present the results of the journey to an interested audience in the frame of a joint exhibition. After daily business, I worked for hours in the laboratory, deep into the night to develop the Fine-Art-Prints of my pictures. In doing so, it became clear to me for the first time that, on the one hand, good pictures were developed and, on the other, it was a very exciting project with good prospects. I remember to this today the silent and dark exhibition room in, where the well-lit photos were presented together with renaissance music playing in the background.

So, it happened that I could infect the next colleague with the Canfranc virus. In the next year, another trip and many pictures followed, especially in the inner rooms which we could not enter the year before – this time we experienced continuous rain fall. In the following years, I also organized a trip to Canfranc in summer to continue this project. The photos which are presented here have been developed in the period of 1996 – 2000 when it became clear to me that the photographic work has been finished, also due to the increasing deterioration and vandalism which destroyed a lot.

Thus, Canfranc became very close to my heart – more than any other place in the world. And I wish that the viewer of my pictures can retrieve this feeling. I try to visit the train station again when I am nearby, not to take pictures, but out of inner solidarity. The place has changed. Many things, which can still be seen in the pictures, cannot be located now. However, I always walk around the area silently and quiet at least for two hours to redevelop the old feeling of intimacy. I still hope for the preservation of the structure, especially the train station, and for the recommissioning of the railway line. And if there is ever a book of my photos, the Canfranc project will be finalized!